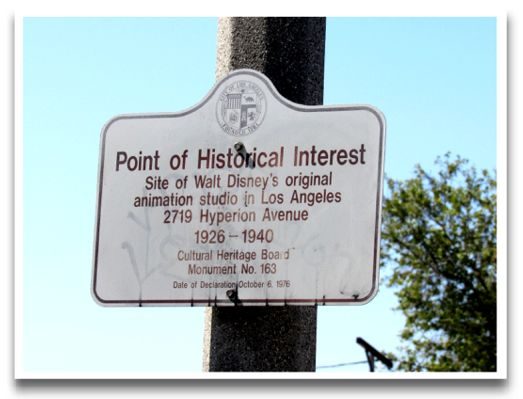 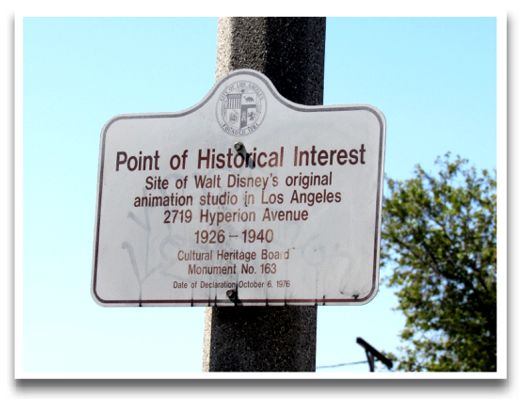 We traveled to the Los Feliz neighborhood in Los Angeles as part of our recent Californy er Bust! road trip.  I wanted to visit some of the locations showcased in our previous articles Walt Disney’s Los Angeles 1923-1931, originally produced and posted here in 2010.  We recently reprinted the series as a single article to coincide with our new explorations of that area. Our first stop, of course, was 2719 Hyperion Avenue, the location of Disney’s first major studio complex and our namesake.  The historical marker there is getting a bit weather-worn and shows some signs of vandalism, but it continues to stand as the only reminder of the location’s historical significance. 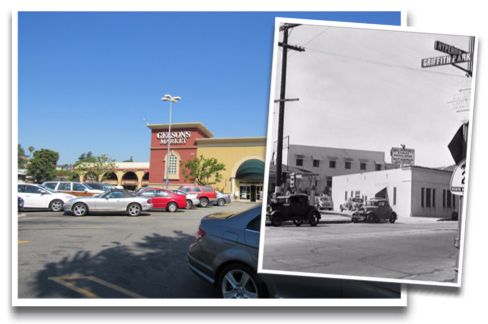 The Gelson’s Market grocery store continues to encompass the area where the studio once stood. Just a few blocks away from 2719 Hyperion are the former homes of Disney Brothers at the intersection of St. George and Lyric Avenue. Walt and wife Lillian’s house was near the corner at 2495 Lyric Avenue; Roy and Edna’s house was adjacent at 2491 Lyric Avenue. Both couples moved into the houses in 1927.

We visited a few nearby landmarks that were featured in our original post, including the Shakespeare Bridge and John Marshall High School. 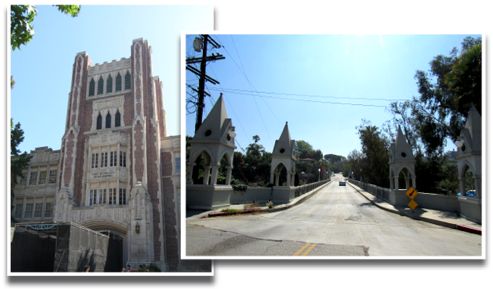 Our final stop in Los Feliz was the very significant area surrounding the intersection of Kingswell and North Vermont Avenues.  4406 Kingswell Avenue was the home of Robert Disney, uncle to Walt and Roy.  This was Walt’s first residence upon arriving in California in 1923.  For a brief time, Walt worked on his various animation projects in the property’s garage. 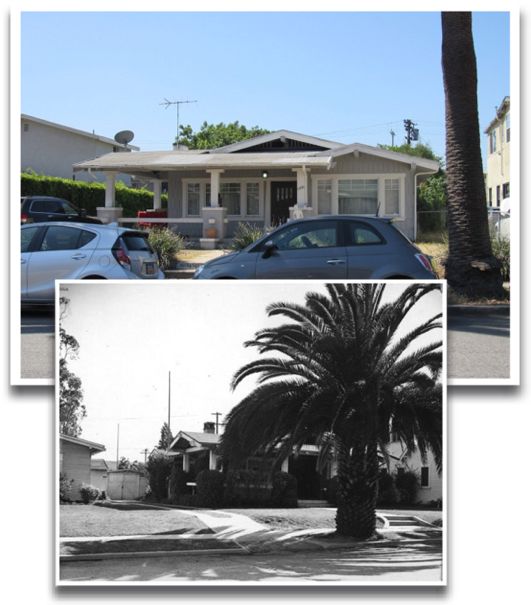 For a little over a year, Walt and Roy shared a rented room at 4409 Kingswell Avenue in the home of Charles and Nettie Schneider. 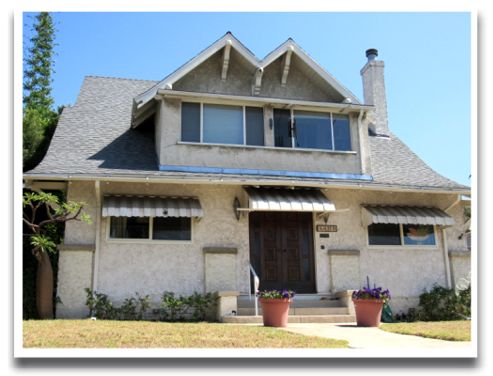 One block off of North Vermont is the small apartment building at 4637 Melbourne Avenue where Walt and Lillian briefly lived following their marriage in 1925. 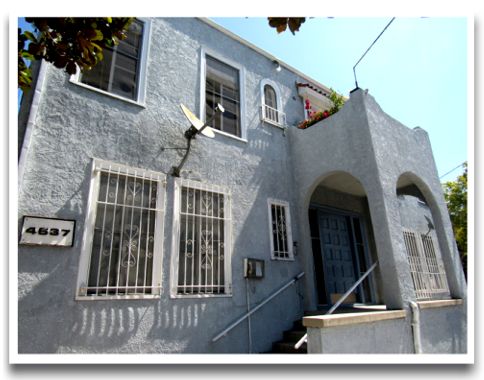 Native to this area during the 1930s and 1940s was the moniker “Hollymont,” most likely a combination of Hollywood and Vermont.  Located on North Vermont near Kingswell was the Holly Mont Market grocery store and the still surviving Hollymont Apartments.  Disney Imagineers paid homage to Hollymont terminology in the recent refurbishment of Disney’s California Adventure with a sign advertising the Hollymont Property Associates. 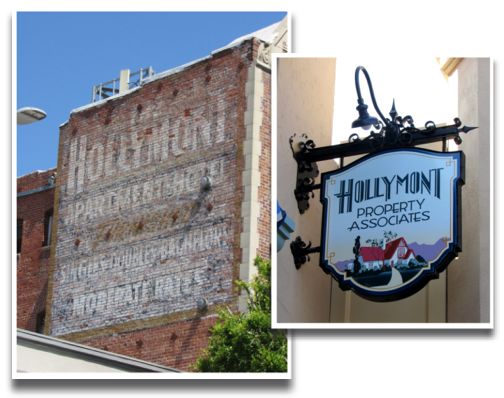 The most important Disney-related location in this area is 4649-4651 Kingswell Avenue, where the original Disney Brothers Studio emerged in 1923.  The brothers and their small staff originally shared office space with a realtor at 4651; they moved next door to 4649 in early 1924.  The Extra Copy store has occupied that spot now for quite some time with a street address of 4647 Kingswell. 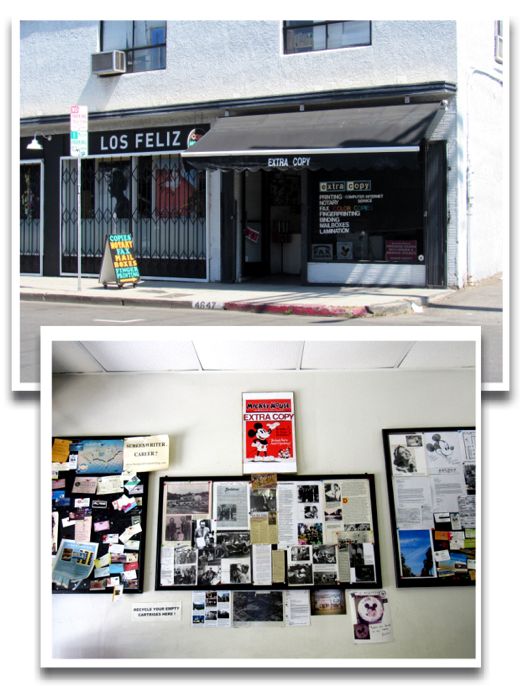 The store is a very small space but it does manage to pay homage to its history with a small Disney shrine on its interior left side wall. 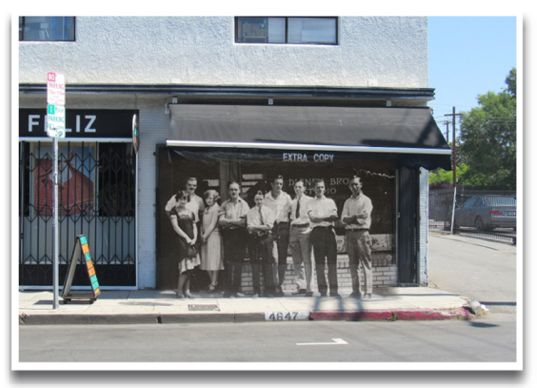 I was especially delighted to photograph the Extra Copy storefront in order to create historical composites similar to the one created for our original post. 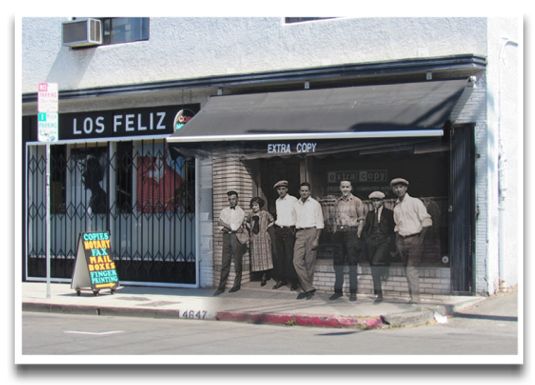