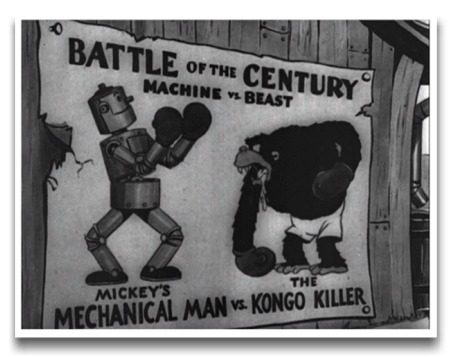 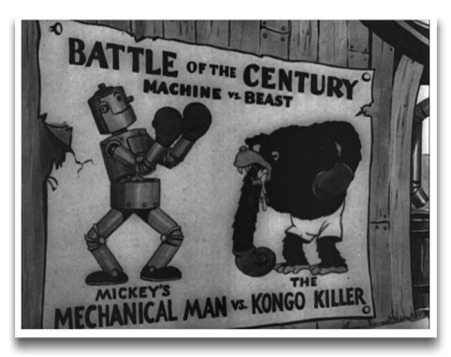 âThe robot angle is popular now. There have been several robots made that really do perform things, and the public is aware of the possibility of the thing.â

Is he referencing the now-famous Buddy Ebsen âlittle manâ experiment? Or discussing the advent of audio animatronics as ultimately realized by such milestones as Great Moments with Mister Lincoln or Pirates of the Caribbean?

No, these words predate even those events by quite a number of years. They were written in January of 1933 as Walt put to paper his ideas for a cartoon short that would ultimately take the form of Mickeyâs Mechanical Man, released on June 17 of that same year.
The cartoon was an odd and decidedly offbeat entry in the still clearly evolving Mickey Mouse series. As Walt noted, a fascination with robots and mechanical men was gradually emerging in Depression-era popular culture and it would reach a crescendo of sorts with Westinghouseâs introduction of Elektro the Robot at the 1939 New York Worldâs Fair. But while Mickeyâs automaton marvel is certainly inspired by representations of robots in the science fiction pulp magazines of the era, the cartoonâs story and setting are much more pedestrian and decidedly non-âfantasticâ in nature.For Sam, as Mickey named his mechanical wonder, is not destined for the amazing adventures experienced by his magazine and Hollywood counterparts, but was created in fact for a slightly less inspired function: boxing. 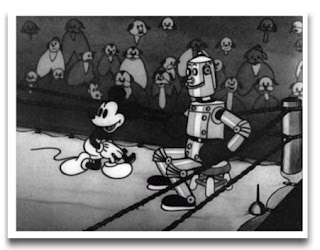 Samâs adversary in the ring took its cue from another popular archetype of the period, a savage and menacing gorilla. Likely the shortâs creative talent were aware of the impending April 1933 release of Merian C. Cooperâs King Kong, as the storyâs boxing simian just happened to be named The Kongo Killer.

The storyâs action and humor center on the literally one-note gag of Minnieâs car horn that sends Sam into a frenzied, out-of-control rage. It is ultimately that gimmick that empowers Sam to defeat his rival. In a fast paced sequence, boxing glove-donned arms and apertures rapidly and successively emerge from all over Samâs body and pummel Kongo into submission.

While Waltâs original notes detailed scenes of Mickey actually building Sam and subsequently operating him by remote control, the finished short provides no apparent explanation of the robotâs origin, and he acts relatively autonomous from his mentor. Without this background, the cartoon takes on an almost matter-of-fact attitude towards its somewhat wacky premise, as if robot-gorilla matchups were common events during those early years of the Great Depression. But as in many of Mickeyâs early black and white efforts, itâs the occasionally off the wall and weird ideas such as those realized in Mickeyâs Mechanical Man that became many of the mouseâs more memorable moments. 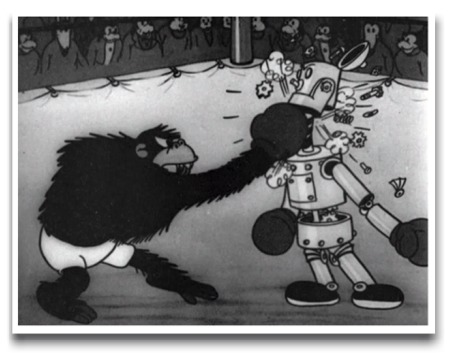 In the end what I enjoy the most about this particular short is the simple tin can-style design of Sam and how it epitomized those early steam-powered, gear-filled representations of mechanical men. Cartoons are very often snapshots of popular culture, and Mickeyâs Mechanical Man presented us with an early rendition of what would become a major icon of science fiction-themed entertainment.

Special thanks to Hans Perk who made available Waltâs original notes for Mickeyâs Mechanical Man on his website A. Film L.A.