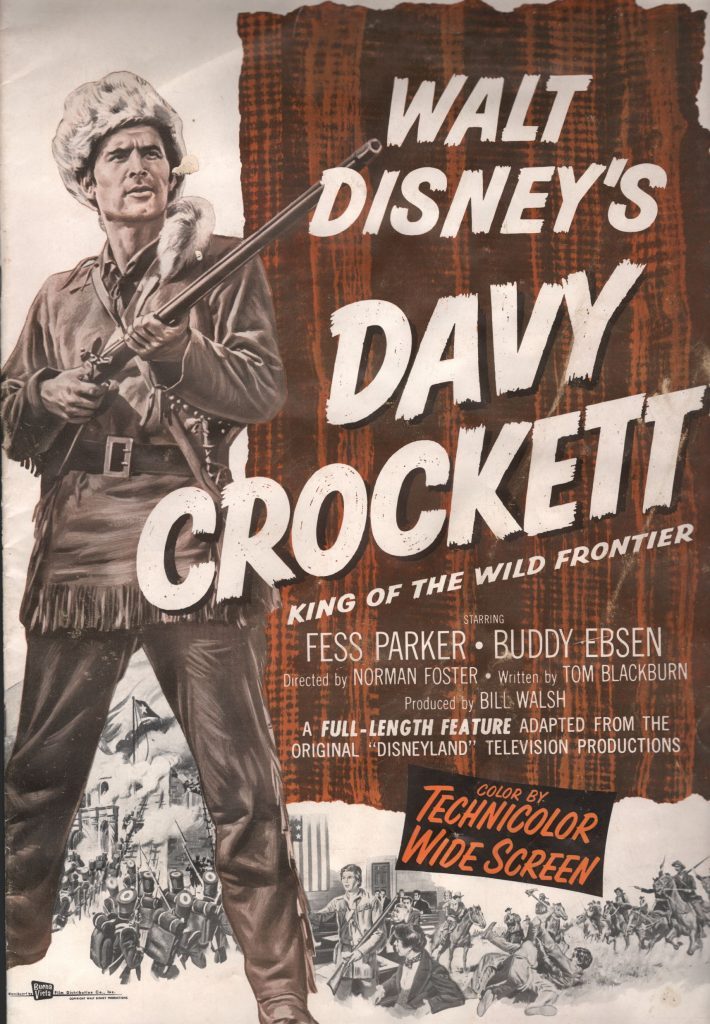 This month the Disney History Institute is proud to cover one of the Pop Culture Classics, Davy Crockett- King of the Wild Frontier.

As I was going through the many pages of the campaign manual for this movie, which stated out as a serial on the Disneyland TV show, I was not able to find the typical synopsis for publication. This is normally published by the newspaper to help drum up publicity for the movie to help encourage the readers to attend. What I did find was surprising. There was a synopsis, but it was marked to not to be published.

This synopsis comes out to just over 650 words, and would have given the reader the entire story. It’s not the attention grabber we normally see, as it meant for the publishers and not the customers.

It is also to be expected that those that were coming to the theater more then likely had seen this production while it was on the Disneyland TV show. Coming to the theater to see it again would have just been a great way to be able to watch the series at one time, and see it on the big screen, rather then on the small TV screen at home.

Be sure to follow us on Twitter, @disneyhistory , and our Facebook page, and our podcast for even more information to what will be posted throughout the remainder of the month for this wonderful movie.

Wars between Indians and settlers
throughout the American south in 1813 have finally prompted military action.

Crockett and his friend, George
Russel (BUDDY EBSEN), set out with Major Tobias Norton (WILLIAM BAKEWELL) and a
troop of cavalry soldiers on a scouting party which ends unluckily when Norton
refuses to follow directions. The two frontiersmen are forced to rescue Norton
and his men from an Indian ambush led by Red Stick (PAT HOGAN), a bloodthirsty
Creek chief.

General Jackson orders a reprisal
attack on Red Stick following this incident, but in the ensuing battle Red
Stick escapes.

While Crockett and Russel return
home to lay in winter supplies for their families, Jackson launches a
long-range campaign against the wily Red Stick. It leads all the way to
Florida. Crockett and Russel rejoin Jackson there to discover Red Stick is
still at large. Tracking down the elusive chief and invoking Indian law, Davy
meets him in a vicious tomahawk duel. Red Stick is beaten. Davy uses the
victory to win his friendship, and Red Stick agrees to sign a peace treaty.
Their mission accomplished, Crockett and Russel head back home.

The nation is growing, however,
and Davy decides to follow the widening frontier. To file a claim for land he
has staked out as a new homesite, he and Russel ride into a nearby village.

Davy enters a beef shoot there
and wins against his only opponent, a local bully named Bigfoot Mason (MIKE MAZURKI).
When Crockett learns that Bigfoot is at the head of a gang dispossessing Indian
settlers, he agrees to become magistrate and enforce the law. Davy challenges
Bigfoot and, after a mighty fistfight, has the scoundrel and his henchmen arrested.

Shortly after this triumph,
Crockett receives news that his beloved wife, Polly (HELENE STANLEY), has died.
Although these sad tidings blunt his taste for politicking, he is virtually drafted
in a subsequent election to the state legislature.

Andrew Jackson, now a
presidential aspirant, endorses Crockett as a congressional candidate and the
two win their respective elections. Davy becomes famous as a droll,
plain-spoken, hard-hitting congressmen who lives by his motto, “Be sure
you’re right, then go ahead.”

President Jackson arranges
through his political adviser, ex-Major Tobias Norton, to have Davy sent on a
good will tour and takes advantage of buckskinned congressman’s absence to try
and force through a bill that would deprive Indians of certain governmental
rights. Crockett learns of this sly venture just in time, and returns to
Washington posthaste to sacrifice his political career by opposing the bill and
defending the rights of his one-time enemies, the Indians.

His tenure in Washington over,
Davy and Russel board a river steamer heading south. Learning that Texas is
fighting for her life, they decide to join the fray. Enroute to the Alamo they
pick up more volunteers: Thimblerig (HANS CONRIED), a crooked gambler, and
Bustedluck (NICK CRAVAT), an outcast Comanche.

Inside the Alamo, Crockett and
his “company” meet Col. William Travis (DON MEGOWAN) and Col. Jim
Bowie (KENNETH TOBEY). The ailing Bowie tells Crockett in confidence that the Alamo
is doomed unless reinforcements arriveâan unlikely possibility.

George Russel makes a daring ride
through Santa Anna’s lines seeking help, but returns with bad news. There can
be no reinforcements. Knowing their fate, every man volunteers to defend the
Alamo to the death.

For 13 days they resist Santa
Anna’s assaults on the fort. But finally the enemy, in an overwhelming attack,
succeeds in scaling the old walls. During the furious infighting that becomes a
massacre, Russel, Thimblerig, Bustedluck, Travis, Bowie and the remaining
volunteers meet heroes’ ends.

Davy Crockett is last seen standing alone, surrounded by fallen comrades, swinging his trusty rifle in a desperate but futile attempt to stem the wave of enemy soldiers engulfing him.