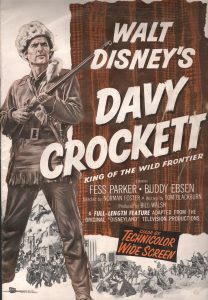 When promoting a movie, studios such as Disney would normally give newspapers and theaters prewritten articles to help get things going. Today we are looking at one titled, âWall Disney’s “Davy Crockett, King of the Wild Frontier”â Perfect Blend of Historical Fact With Wonderful Entertainmentâ.

Articles such as this are used to help build up the excitement of the coming feature film and get more people in the seats. Unlike the previous articleâs synopsis, this was meant for the public. Read through it and see how you feel about seeing it. Does it get you built up to sit down and watch, or does it not?

You will notice that this is a cookie cutter article that was to be used across the country. Within the first sentence it contains a dashed line. This was meant for the newspapers, or other promoters, to replace this with the name of the theater that was in their town. Enjoy the article and keep your eyes open for more to come!

The big event of the day is the arrival of Walt
Disney’s “Davy Crockett, King of the Wild

Frontier,”
at the â¦â¦â¦â¦â¦.. theatre. Seldom has there been so much authentic action in a motion
picture as breathlessly paced as this wide screen presentation in color by
Technicolor.

Rigidly adhering to historical dates and events, Disney
recreates the lusty legend of one of America’s foremost pioneers âDavy
Crockett, the buckskin backwoodsman from Tennessee who fought his way from the
Great Smoky Mountains to the flaming Alamo. Traditional heroes come alive once
more as Davy battles alongside such immortals as Andy Jackson, Jim Travis and
Jim Bowie.

There’s endless excitement from the time Davy “grins-down” a bear to the moment he takes his place on the ramparts of the Alamo. There are the Indian Wars and the hand-to-hand tomahawk duel with Redstick, Chief of the rampaging Creek tribes. There is Davy in Congress, all decked out in deerskin, winning over the support of political giants with his homespun humor and earthy logic. There is the attack by Santa Anna’s armies against the tiny Texan garrison and, of course, there’s the “Ballad of Davy Crockett,” the song that has literally hurdled all competition in its climb to the top of the Hit Parade.

Handling the title role is a tall, lean newcomer name of
Fess Parker who hails from Fort Worth, Texas. He is the young man who holds the
enviable record of being the only adult ever signed to a long term acting
contract by Walt Disney. His ingratiating manner and quiet delivery mark him as
a natural for the roleâand for a long time to come the names Fess Parker and Davy
Crockett will signify the same man to the millions who will see this picture.

Adapted from the original “Disneyland” television
productions, “Davy Crockett, King of the Wild Frontier,” comes to the
screen as a lavish American spectacle in brilliant color by Technicolor.

The picture also stars Buddy Ebsen as George Russel, Davy’s real life sidekick who passed along the wonderful stories of his friend’s amazing exploits. Ebsen, a former dancer, is a revelation in this role. He proves himself to be a fine actor whose ease of performance fits in perfectly with Fess Parker’s portrayal of Crockett.

Congratulations to Walt Disney for this handsome production. Aside from supplying some exciting motion picture entertainment, he has also given American kids a real honest-to-goodness American hero to idolize.

Uncategorized Vintage News
PREV POST
NEXT POST
© Copyright - All Rights Reserved. Website Powered by DBL07.co All Images in The E Ticket magazine belong to Disney or the Disney Family Museum. We are not affiliated with The Walt Disney Company, Disney Enterprises, Inc., or any of their affiliates. As to Disney artwork/properties: © Disney. All other photos and images are the property of the respective copyright holders. All rights reserved.