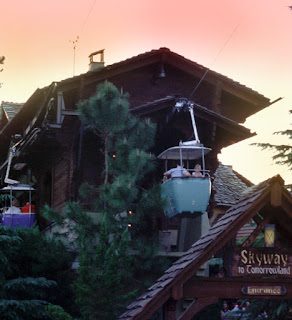 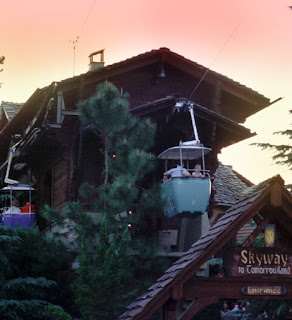 A few years ago, I previewed a bit of the work being done in an infuriating little corner of Disney music that I call “The Swiss Loops”. This is a group of three or four Jack Wagner loops created at an unknown time consisting entirely of alpine music – yodeling, accordions, lederhosen, etc.

So grab your alpenhorn and feathered cap, and let’s finally get this out of the way – we’re going to plunge into those infernal Swiss loops. I hope you like polkas!

One of the least appreciated areas of Magic Kingdom is the stretch of Fantasyland that runs from Liberty Square, up past what was once the Skyway Station, past Small World, and ends with Pinnochio Village Haus. On early blueprints, this is called the “Pinocchio Street” – an area of steins and Bavarian charm anchored by a Swiss chalet spitting out a steady stream of brightly colored sky buckets. Compared to the more prosaic and less elaborated themed west side of Fantasyland, and especially compared to the Fantasyland of 1955 which was still what Disneyland had, this little area was the seed that eventually would overrun the entire concept of Fantasyland, turning the whole of the area into Little Europe. It may not look like much to anybody who’s been to the 1983 Fantasyland at Disneyland or the 1992 version in Paris, but for 1971 the Pinocchio Street was a major accomplishment, and had its own specific project name to prove it.

Regardless, what is likely the earliest surviving piece of music associated with this area was thankfully recorded by Mike Lee in 1991. It’s only 30 minutes long, which puts it in line with other early music loops of its era, and the two Capitol Records LPs used in the Matterhorn Bobsleds queue BGM also appear in it.

Thanks to a snippet posted by the excellent website WaltsMusic, I’m confident in assigning a date to this one. The WaltsMusic segment, taken from Jack Wagner’s collection, is the first seven tracks represented here, and is labeled “Village Haus Disneyland 1974”. Since Disneyland didn’t have a Village Haus in 1974, this has to be our date.

I’d give a lot to know if music played in the Skyway and Village Haus before 1974, but like a lot of early Disneyland and Magic Kingdom music, we’ll just never know.

For this track to be playing in 1991 seems astonishingly late considering that its replacement, fully considered below, had already been available for eight years by that point.

However, the 1990/1 date does line up with when Magic Kingdom was really starting to standardize their sound system – see my piece on Tomorrowland for another example. Once “Fantasyland West” received its new digital music playback system, of course it would receive the newer, longer version of the Swiss loop. 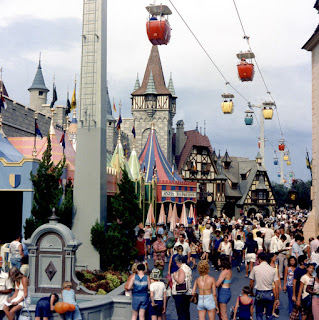 For decades, a 60-minute loop has been floating through the Disney music diaspora  called “Fantasyland West”. Trying to identify the tracks in this loop has always been an absurd nightmare of yodeling, brass bands, and alphorns – after even just a few minutes, all of the yodeling begins to bleed together and my eyes would begin to roll back into my head.

Which is how things stood for years. This 60 minute loop played in the Skyway station at Magic Kingdom and Disneyland, inside Village Haus restaurants in California, Florida, and Paris, and heck, even at Tokyo Disneyland – here’s a quick video where you can hear it. Besides the fact that it had seemingly been playing since anybody could remember, nobody had any idea where it came from or what it was made up of.

Most of the really early Magic Kingdom music loops were really odd lengths. But even if Disney had wanted to replace the Skyway / Village Haus loop as early as, say, 1975 – when both Main Street loops got filled out to a full hour – it’s hard to imagine them having a good incentive to pay Jack Wagner to do the same work over again.  In the early 80s, Disney was moving to standardize the length of all of their BGM loops to exactly 60 minutes thanks to emerging digital formats, a standard that holds even today.

What makes more sense to me is that Jack prepared the 60-minute loop as part of his commission to prepare the music for Tokyo Disneyland. Many of his loops for TDL are interesting expansions and variations of his earlier loops at Disneyland and Magic Kingdom, and all of them are a rock solid hour in length. It also makes sense that Disneyland would use the same loop as part of their New Fantasyland project, which saw the addition of a German-style Village Haus of their own.

Meanwhile, the discovery of “A Visit to Switzerland” on MouseBits by RocketRods and the tracks it shared with the Matterhorn Bobsleds made it much clearer the relationship between all of the various “Swiss” loops was much closer than it initially seemed. Except for one little problem…

Bi Eus im Schwyzerland: A Mystery Inside An Enigma

In mid-2013, our understanding of the Fantasyland West loop improved considerably when, with no warning whatever, most of the source tracks appeared on iTunes. Suddenly, we had track names and performing artists but with no real insight into where these things came from. The album in question was called “Bi Eus im Schwyzerland, Volume 3“, released by the mysterious “Elite Special” and dated 1974. Trouble was, who knows if the metadata provided on the album was at all accurate. Even more worrying, the total run time of the digital release was nearly an hour – a total impossibility on the vinyl records Jack Wagner was working off of in the 70s.

Thanks to the magic of “Bi Eus im Schwyzerland, Volume 3”, we can now show you Ländlerkapelle Edy Keiser, who you’ve been listening to over a loudspeaker at Disney for basically your entire life:

So just who the heck was Elite Special? As it turns out, Elite Special was a sub-label of Turicaphon AG – founded in 1930, and which still exists today in the Swiss town of Riedikon (on the Turicaphonstrasse!). Once you have label and performer information, the rest begins to fall into place.

Its seems as though Truicaphon took a special interest in recording and releasing Swiss folk music in the 1950s – although for all we know, they were releasing these recordings on 78 records in the 30s. Alpine music being of limited interest outside of Switzerland, eventually the Elite Special sublabel was formed to recycle their music into budget LPs of the kind that haunted drug stores through the 60s – cheapjack releases with names like “I Remember Switzerland”. Just looking at the mysterious track data and recording company history, that much of the story seemed obvious.

But I still was not satisfied with this “Bi Eus im Schwyzerland, Volume 3”. I knew the chances that a single record had nearly the entirety of a Jack Wagner loop was too persuasive to ignore, but after weeks of checking databases and virtual auction sites in English and German, I could find no evidence of a physical release of Bi Eus im Schwyzerland – never mind Volume 3, I couldn’t find Volume 1 or 2. I knew it couldn’t be this obscure.

After literally years of downtime, in which Pixelated put the rest of the puzzle together, finding “Accordion in Gold” by Horst Wende, I was ready to try again – and I finally struck gold in the Worldcat, where “Holiday in Switzerland” had a single entry with nearly every track listed – the only thing missing was the track “Jodel-Polka”. I even found a company in the United States selling a CD of the album.

I was so close I refused to believe that this was not the correct album. After another search through German eBay, I was able to find the actual LP – and “Jodel-Polka” was included. As it turns out, Jack had dumped practically the entirety of “Holiday of Switzerland” into his Village Haus loop, and in near exact album order, no less. With the 4-year mystery of “Bi Eus im Schwyzerland” solved, the Village Haus loop finally came into focus. 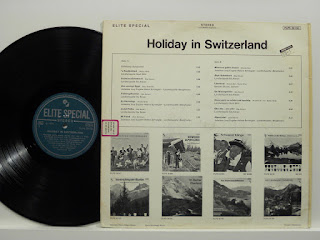 One of the nice things about having the actual Holiday in Switzerland album to look at is that it clarifies that not all of the tracks included in the loop are traditional songs. Nearly everything on Holiday in Switzerland is an original composition – these traditional folk music groups, which had likely been performing together since before World War II, and who recorded their efforts for a small, local recording industry would eventually go on to be heard by billions of vacationers in search of a cheap pizza in Florida. That’s an exceptionally bizarre path to infamy, but it’s a good one.

Also interesting is the inclusion of a single track by the Fantasyland Polka Band smack in the middle of the loop. Many versions of the loop begin with the Heigh Ho, but the loop does appear to play out as I’ve got it arranged here, with the Polka Band around the 30 minute mark.

The Polka Band was an afternoon offshoot of the Walt Disney World Band that hung around Fantasyland for a few years in the 70s, and their phantom appearance in their old haunt is intriguing. It reminds me of Jack’s use of Fred Burri in the Matterhorn Bobsleds loop – a recorded testament of atmosphere music which was once recorded live.

Honestly, this is probably how all of Disneyland’s music loops began – a tape would be played while the band went off to lunch. A few years ago, a tape was sold on eBay which supposedly played in the Skull Rock seating area of the Chicken of the Sea restaurant in Fantasyland. Without having a transfer of the tape to be sure we’ll never know, but it appeared to be a recording of the pirate band which played in that area in the early 60s. Intentionally or not, this notion survives in the Matterhorn and Village Haus loops of today.

And with that romantic notion, I think we’ve found as good a place as any to finally put this subject to rest. Auf wiedersehen!

Ready for more? Visit the Passport to Dreams Theme Park Music Hub.
Or, hop a monorail to the past and spend a full “day” at the Walt Disney World of the 1970s by downloading Another Musical Souvenir of Walt Disney World.