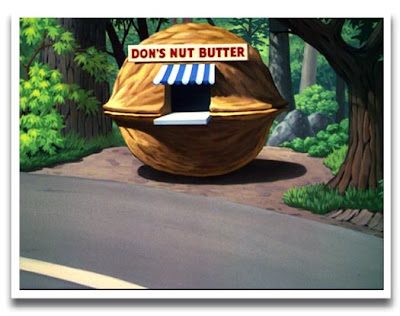 “At the beginning of the automobile age, in that most car crazy of places, Southern California, roadways were dotted with eye-catching beacons for travelers. Diners shaped like chili bowls, pigs, and coffee pots; hotels and theaters in Aztec and Mayan motifs; and all matter of oddly shaped buildings were part of the western architectural landscape–a trend that spread across the country.”

From the book California Crazy and Beyond by Jim Heimann

Programmatic architecture, more commonly referred to as “California Crazy,” was a visual mainstay along the roads and highways of southern California for much of the early half of the 20th century. It was not surprising then when Disney cartoon makers drew inspiration from programmatic design when creating the 1949 Donald Duck short All in a Nutshell. 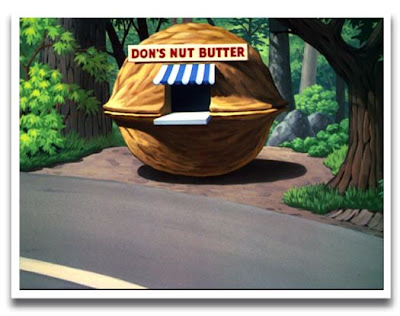 In the cartoon, Donald Duck is the proprietor of a roadside stand called Don’s Nut Butter. Shaped like a giant walnut, the stand is not just simply 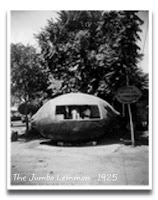 a background element–it is the gag that propels the story. Coveting this huge “nut,” Chip and Dale set about attempting to crack its shell. When they breech an opening near the top, they discover its non-organic nature, but then decide to instead dedicate their efforts to pirating off as much of the duck’s nut butter as they can possibly manage.

Don’s giant walnut was inspired by numerous roadside establishments that were typically produce stands or counter service cafes. Very similar in appearance and style to the Nut Butter stand was the Jumbo Lemon, one of a chain of drink stands with locations throughout California. Other notable examples included the Chili Bowl, the Mushroom Cafe and the Tamale, all small diners that sprang up in southern California during the 1920s and 1930s. 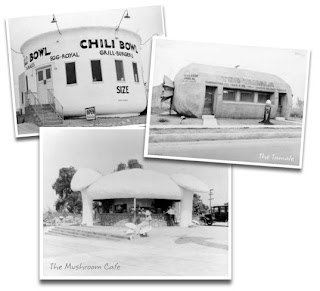 Two years prior to All in a Nutshell, Disney animators made reference to one of the most famous examples of programmatic architecture, in the 1947 feature film Fun and Fancy Free. At the end of film, Willie the Giant is seen walking through the Hollywood landscape, searching for a “teensy-weensy little mouse.” He spies the famous bowler hat architecture of the Hollywood Brown Derby 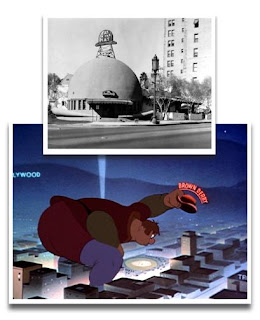 Restaurant, picks it up and places it on his head. This very funny and then quite topical gag poked fun at the original Hollywood Brown Derby on Wilshire Avenue and its over the top California Crazy design.

When Disneyland opened in 1955, it could be said that it was in many ways an extension of California Crazy, taken to a much more sophisticated level of design and execution.  But the Walt Disney Company would in fact revisit programmatic architecture in the style’s more historic context when, in 1989, the company recreated an idealistic golden age of Hollywood as part of the theming for Disney-MGM Studios. Included in the park’s initial design were two very distinct homages to 1930s era California Crazy motifs. Both were located into the Echo Lake area of park; both were counter service food establishments (as were the vast majority of vintage-era programmatic buildings), and they both bore thematic connections to early Hollywood productions. 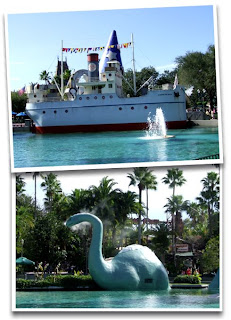 Dinosaur Gertie’s Ice Cream of Extinction paid homage to the star of Windsor McKay’s landmark animated cartoon from 1914. Dinosaurs have long been a popular subject for novelty architects and Gertie is similar in design and scale to other roadside dinosaur structures. Other creature-inspired establishments ran the gamut from dogs and chickens to pigs and fish.

Min and Bill’s Dockside Diner was inspired by the 1930 film Min and Bill starring Wallace Berry and Marie Dressler. Imagineers drew on the movie’s waterfront setting to create the counter service venue that takes the form of a vintage tramp steamer. Nautical design was an especially popular theme of California Crazy, distinguished typically by land-bound ships, boats and even inspired interpretations of Noah’s Ark.

In an interesting, and somewhat ironic twist, Imagineers did not reproduce the original bowler hat design when they recreated the Hollywood Brown Derby Restaurant at the Studios park. Instead they based the signature eatery’s design on the Hollywood Brown Derby location that was built near the intersection of Hollywood and Vine. But Imagineers did recreate the storefront facade of the Darkroom, a well known Hollywood retail store, for the park’s own camera shop on Hollywood Boulevard. And it certainly could be argued that the oft-debated (and recently removed) giant Sorcerer’s Hat that became an icon of the Studios is but another shining example of programmatic architecture. 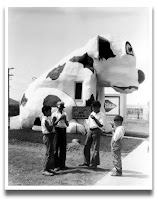 One final interesting Disney-California Crazy connection to make note of: comics writer-illustrator Dave Stevens incorporated one of the more famous programmatic structures, the Bulldog Cafe, into his graphic novel The Rocketeer. Disney recreated the cafe when it adapted the work into a film in 1991, and that particular set piece resided for a number of years on the back lot at Disney-MGM Studios. The original Bulldog Cafe dated back to the 1920s and was located on West Washington Boulevard in Los Angeles. A very similar building, called the Pup Cafe, was a popular hot dog stand and served the citizens of Venice, California during the early 1930s.