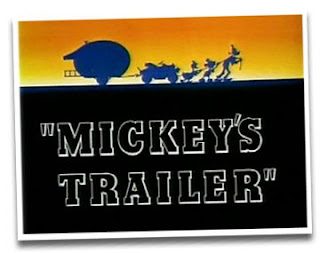 Editor’s Note: This week, in anticipation of our upcoming Californy er Bust cross-country road trip (departing Saturday, June 13), we will be reprinting articles from our Roadside Disney category. Enjoy! 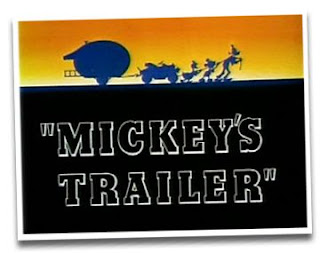 It is an icon of roadside popular culture. A home on the road for tin can tourists. Over the years, Disney cartoon makers incorporated the American travel trailer into a number of short subjects, but perhaps never more famously than in the Technicolor classic Mickey’s Trailer, released on May 6, 1938.

Mickey’s Trailer was not born out of happenstance. A mere decade earlier, everyman Arthur Sherman, a modest bacteriologist, turned the then fledgling auto camping movement on its ear when he introduced a solid-walled trailer that was devoid of the more traditional canvas and tent based designs that had been popular up to that point. Jokingly dubbed the “Covered Wagon” by Sherman’s children, it would launch both a successful new industry and a popular culture phenomenon. In their book Ready to Roll: A Celebration of the Classic American Travel Trailer, authors Arrol Gellner and Douglas Keister elaborated on Sherman’s unique achievement:

“Sherman’s Covered Wagon Company was a rare success story in the bleakest years of the Depression, and naturally, it attracted noticeâboth from competitors and from the American press, who were desperate for stories containing some glimmer of economic hope. For their part, Sherman’s competitorsâincluding those who had specialized in all manner of sophisticated, fold-out gadgetryâwere eventually obliged to adopt the Covered Wagon’s hard-walled construction.”

This Depression-era trailer boom reached a peak in 1936, followed quickly by an unpredicted and near devastating decline shortly thereafter. Manufacturers dramatically over predicted growth and demand and the bubble quickly burst. This was coupled with a sudden public disenchantment with many aspects of trailer culture. Gellner and Keister noted:

“The media’s giddy, rose-colored accounts were gradually supplanted by more hostile examinations of the trailering phenomenon. Trailer parks were pilloried as a new kind of American slum-on-wheels and were even accused of being a breeding ground for epidemics, while trailerites were increasingly portrayed as freeloaders helping themselves to public roads and facilities without paying taxes for their support.”

When it was released in 1938, Mickey’s Trailer encapsulated many of these both positive and negative associations. Via Walt’s well known “Probable Impossible,” the canned-ham style trailer featured in the short embodied with extreme exaggeration the trailer manufacturers much hyped claims of style, luxury and countless conveniences. Its interior featured a series of ingenious if not impossible transforming set pieces; a bunk room dramatically morphs into a bathroom (complete with sink and already filled bathtub) and then into its final incarnation as a dinette upon which Mickey serves up breakfast.

Yet the cartoon’s creators, in a subtle yet still noticeable manner, poked fun at the various negative associations to trailer culture that began to emerge in the late 1930s. The short’s opening reveal of the trio’s city dump campsite is indicative of what Gellner and Keister described as local government fears of trailerite slums taking root on city outskirts. The perception of trailer campers as freeloaders is distinctly portrayed when Mickey, without conscience, absconds corn from a nearby farmer’s field and similarly draws milk from a passing cow. The background music for that particular scene featured the song “The World Owes Me a Living.” 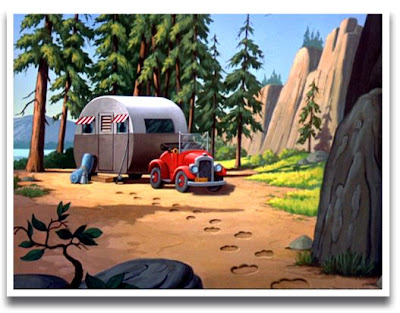 A post-World War II boom returned the travel trailer to a more than receptive American public. The industry itself experienced a distinct split as larger residence-based mobile homes became as equally popular as their recreational-centric counterparts. The smaller travel trailers became linked with then very popular outdoor sportsmen dynamics that included camping, hunting and fishing. This pop culture phenomenon was not lost on Disney animators; they used it to great effect in the 1950 Donald Duck cartoon Trailer Horn. A canned ham-style trailer is the focal point of Chip and Dale’s inspired antagonism and Donald’s resulting frustration.

In the 1952 cartoon Two Weeks Vacation, Goofy falls victim to a well known highway convention–getting stuck behind a lumbering, slow-moving car and trailer combination. Mixed in the short with the Goof’s other road trip pratfalls is a recurring encounter with an oversize and impassable trailer. Similar gags would be revisited quite famously a couple of years later in the classic Lucille Ball-Desi Arnaz comedy The Long, Long Trailer. 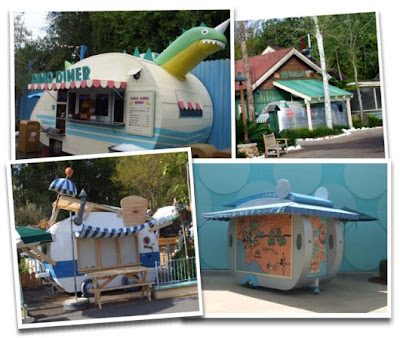 Disney Imagineers have similarly drawn inspiration from the travel trailer and have peppered Disney theme parks with numerous trailer-inspired set pieces. Trading on mid 20th century nostalgia are trailers that appear in Animal Kingdom’s Dinoland, at Disney’s Pop Century Resort and in Mickey’s Toontown at Disneyland. Trailers were also a featured part of a character greeting area at Disney’s Hollywood Studios prior to that particular location’s current Pixar Studios redesign. But likely the most prominent use of travel trailers and their connection to roadside culture are the “Elfstream” designs found at Winter Summerland Miniature Golf at Walt Disney World. The theming mixes roadside campground nostalgia with retro Christmas trappings for a truly entertaining and often hilarious experience. 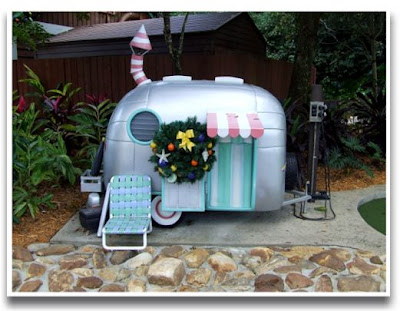