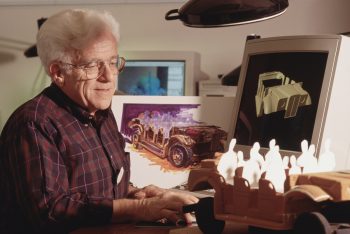 This one is tough to write.

Disney Imagineer George McGinnis has died at the age of 87. George was the last Imagineer personally hired by Walt Disney, and in his thirty years with Disney he worked on many classic attractions including my all-time favorite Imagineering masterpiece, Horizons. He was also a great guy.

George was the first of the Legendary-era Imagineers I ever met. In 2009 my brother and I went to California for the D23 Expo. It was my first trip to California and both of our first trip to Disneyland. It was a total-immersion situation with Disney Legends and shenanigans going on all around us, but nothing could beat the evening we spent hanging out with George.

George and I had corresponded online for some time, as he was a frequent contributor to our Horizons Tribute discussion group on Yahoo (ah, those were the days). He invited Jeff and I up to Glendale for dinner so we went, slightly awestruck by the circumstances.

George welcomed us into his house and toured us through his office, full of paper and foamcore models of some of the famous ride vehicles he helped design. There were reminders of his storied career everywhere – a picture sat to the side showing him alongside the malevolent robot Maximillian from The Black Hole, which he also designed. 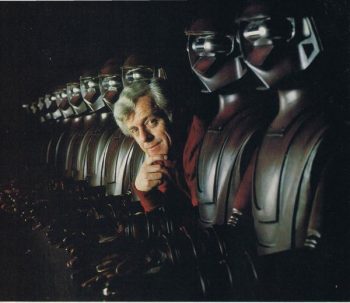 George and some of his Black Hole creations.

George took us out and showed us around Glendale, driving us around the old office park where Walt Disney Imagineering is located. We got the full historic tour of the area – which office had belonged to whom, which parking lot was the one where they tested the Star Tours simulator mockup back in the day, where all the great events of Imagineering’s past had taken place.

We went to dinner at the Americana in Glendale, where he showed us the trolley system he had designed for them (he did the same for The Grove in Los Angeles). He bought us dinner and reveled us with tales, discussing far more than things Disney – lots of politics and philosophy, about which I was delighted to discover we shared much in common.

The fact that this guy, who had done so much, was willing to take a couple of random fans out for dinner knocked me out at the time, and continues to amaze me today. I still can’t believe I got to know the guy who helped lead the design of the attraction which, undoubtedly, was one of the most formative forces in my life.

Born in Greenville, Pennsylvania, George attended school to become an industrial designer. It was in 1966, at Pasadenaâs Art Center College of Design, that Walt Disney, along with Disney Legends John Hench and Bob Gurr, saw Georgeâs student project. George found himself with an invitation to visit the Imagineering offices where he was quickly hired.

Georgeâs first job was to design new modes of transportation for Progress City â Waltâs futuristic city. Working on everything from PeopleMovers to electric golf carts, George created some of the artwork that can be seen in Waltâs famous âEPCOT filmâ from 1966.

George contributed his skills to Disneylandâs new Tomorrowland of 1967, designing the famous âMighty Microscopeâ from Adventures Thru Inner Space and the swirling rockets of the Astro Jets. In preparation for Walt Disney Worldâs opening, George designed a range of vehicles ranging from the WEDway PeopleMover to parking lot trams. He also contributed to the iconic Nautilus submarines for the 20,000 Leagues Under the Sea attraction. In 1971 George became a show designer, spending several years developing Space Mountain for Walt Disney World and Disneyland.

In 1979, George became Manager of Industrial Design for EPCOT Center. His talent for designing robots led to Epcotâs fondly remembered SMRT-1, as well as the menacing Maximillian and heroic V.I.N.CENT from The Black Hole. Returning to Epcot, George became show designer for Horizons.

In the years that followed, George worked on projects for Disney parks around the globe. He designed the Mark V and Mark VI Disney monorails, worked on the Magic Kingdomâs Dreamflight attraction, and created the trams for the Disney-MGM Studios Backlot Tour. Georgeâs work can be found in ride vehicles for Splash Mountain and the Indiana Jones Adventure, and for Disneyâs Animal Kingdom he designed Kilimanjaro Safari jeeps, the Discovery River Cruise rafts, and the Wildlife Express steam engines. After his 1995 retirement he continued to consult on a number of projects, including the Rocket Rods, Kali River Rapids, Grizzly River Run, and others transportation projects inside and outside of Disney.

George published his autobiography last year. Despite his legendary accomplishments, he has yet to be named an official Disney Legend, an oversight which I hope will someday be rectified.

Thanks, George. You are missed. 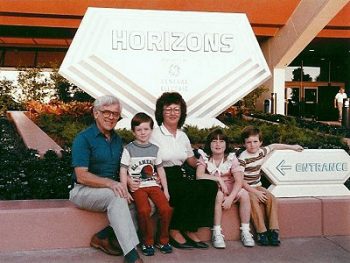 George and his family outside Horizons.

Vintage News
Disney Legends George McGinnis Horizons Imagineering
PREV POST
NEXT POST
© Copyright - All Rights Reserved. Website Powered by DBL07.co All Images in The E Ticket magazine belong to Disney or the Disney Family Museum. We are not affiliated with The Walt Disney Company, Disney Enterprises, Inc., or any of their affiliates. As to Disney artwork/properties: © Disney. All other photos and images are the property of the respective copyright holders. All rights reserved.