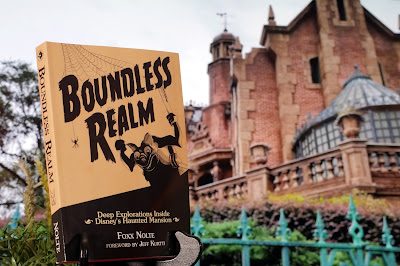 Great News! My first book is now available through Amazon, Barnes and Noble, and other sellers! Click here to grab it, or keep reading to find out what went into this massive project! 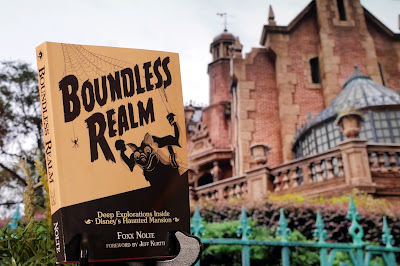 While sitting outside wondering what I was going to do next, a stray thought occurred to me: maybe I should finally write that book. If only I had known…!

For some time before that, the idea had been percolating in my mind that I probably could write a book about the Haunted Mansion that would be unlike the other two books already written. Write what you know, as the saying goes, and I definitely knew the Haunted Mansion. Some time before I had read Roy Blount Jr.’s Hail, Hail, Euphoria!, a sort of text-based audio commentary for the Marx Brothers comedy Duck Soup, which moves along through the film point by point while allowing time to stop discuss matters requiring more elaboration. That struck me as an interesting way to structure a book about a theme park attraction. So I started writing one day.

The trouble is that I had no idea how to write a book except that I needed to write a lot, so I just kind of started writing. And writing. And writing. This is a terrible way to write a book, I probably don’t need to say, but it was the only way I could think of to force myself through it. And one reason the book took as long as it did is because I very much invented what the thing was about as I deleted sections, added others, re-thought the format, and slowly discovered what the tone and shape of my first book was going to be.

Along the way the book stopped being wholly a ‘virtual tour’ of the attraction and began to widen out beyond the typical scope of a Disney book. On this blog I’ve often struggled to give full expression to the scope of my interests, but in this book they roam free, wide, and loose, causing frequent detours into history, or film culture, less exhalted  corners of theme park design, or dreams and folklore. Each chapter in the book is, like the essays on this site, roughly self contained, but unlike here they can also build and twist back into each other since they are laid ut in a fixed linear way. So, if you just jump in and want read my thoughts on one section of the ride, that works as a contained unit, but as the book goes on the resonances between sections build into a more holistic portrait of a great piece of art. If you’ve ever wondered what a 300 page Passport to Dreams post would be like, here is your answer.

Yet I’ve also tried to keep the book fast moving and fun, and the result is, I believe, the first Disney book of its type published anywhere. This is the first critical monograph on an attraction ever published, attacking the question of what makes the Haunted Mansion so great from any angle I can find. Like it says on the cover: deep explorations.

And that’s my best answer to why we need a third book on the Mansion. It really digs into why and how the thing works so well, and why this weird ride from 50 years ago still garners fans.

Those who enjoy the level of fiddly detail I poured into my previous giant project, Another Musical Souvenir of Walt Disney World, will find much that is familiar here. I wanted to make this book as intensely involved with the Mansion as I am, and I’ve made sure that every inch of this book is full of little touches that speak to its pedigree – like me – of a result of this intense involvement.

For instance, the illustrations. There were from the start certain things that I could not publish – either because I could never secure the proper clearances to do so, or because good photographs simply not existing. So I ended up rendering around 30 illustrations, which are almost as moody and detailed as the ride itself is.

I wanted the book itself to feel almost as if it’s inhabiting the same universe as the ride, not just lifting design cues. It would have been easy to throw the Haunted Mansion font everywhere and call it a day, but my goal here was to have an end result that felt as if you had gotten out of your doombuggy and pulled a book off the shelf in the ride’s library scene and it just happened to be this book.

I also wanted this book to be the sort of thing you would feel comfortable reading in the bath tub (where I do a lot of my reading) or popping in your luggage to take to Disney. I want you to enjoy and use this book, which is why it’s a reasonable size and only available in soft cover. As a twelve year old I dragged that huge Imagineering hardcover book with me everywhere, and it sure looks like it today. As a Disney book collector, I’ve also been encumbered with such volumes as the Taschen Walt Disney Film Archives, a thing of beauty that cannot reasonably be stored on existing book shelves. My book is intentionally the opposite of the monster eight pound books we have all been accumulating with increasing regularity.

There will be a digital version available, although only for Amazon’s Kindle format. There are unfortunate technical reasons for this, as it became quickly apparent that targeting the more broadly supported EPUB format would involve essentially redoing all of the months of work we had just put into the print version. The Kindle version has all of the same content in a roughly comparable format, but the layout and text choices are compromised and in my opinion the book looks significantly worse. This is par for the course for eBook formats, so if you have the option, I hope you’ll spring for the print version.

The title was a constant problem. My preferred original title was Sympathetic Vibrations, but there’s already plenty of things out there already called that. For a long time I called the book This Old Dark House, which is what the central “tour section” of the book is called. I liked this because it made reference to the “old dark house” thriller genre which I feel the Mansion is directly descended from, but it’s a sort of dopey thing to call a book. I knew I needed something better, something that ideally implied that the book had a certain historical perspective and was unusual. I landed on American Phantasmagoria, which I liked a lot. In the end, the name Boundless Realm occurred to me earlier this year, which is just about perfect. It’s a line from the ride – although not an obvious one – and it implies the there’s going to be a lot of ground to cover here. In concert with a cover image which intentionally leans more into “40s horror movie” territory, it really implies that this is going to be a Disney book with a difference. 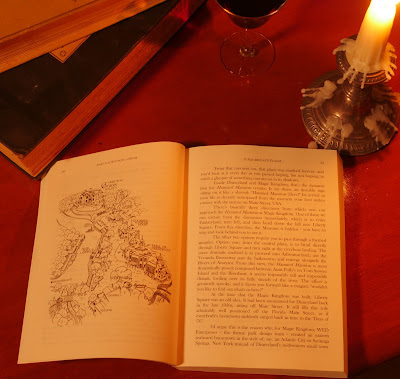 Some of the delays occurred as a result of simply needing to wait for Disney to finish things. I had written a chapter on Phantom Manor, actually one of my favorite sections in the book, when Disney announced they were going to close that ride for a huge refurbishment which they then kept extending. I wanted to wait to see what they did, which ended up being the right choice because the changes they made really ended up affecting the content of my chapter, which had to be revised.

And then so much time had passed that it didn’t make any sense to not just wait for Chris Merritt’s monster Marc Davis book, just to double check that his research didn’t flatly contradict any of mine, which thankfully it did not. I had a manuscript, illustrations, a cover…. ready to rock and roll, right?

Except! It turns out actually getting anything published is another nightmare!

After slamming into this brick wall for a few months, my preferred publisher returned the opinion that a combination of the worldwide pandemic and the Disney connection meant they would not be pursuing this. I began talking to other authors about their experiences, and found that besides official publications and of course Theme Park Press, nearly every Disney book is self-published. Maning every author out there had been also turned down by multiple publishers.

If nobody else had yet succeeded, I figured my chances of breaking through were limited. That was a rough month for me, but I began to explore my other options.

I ended up partnering with David Younger, whose massive, ludicrous tome Theme Park Design is in my opinion one of the best books on the subject ever produced. Together, we’ve decided to launch Boundless Realm as the first in a hopefully ongoing series of high quality, scholarly books on aspects of theme park design less as a publishing house and more as a kind of collective effort of authors. This book would literally not have been possible without David’s help and I could not be prouder of it.

David is also selling a bundle copy of his textbook and my book through his website, if you’d like to grab them together.

Boundless Realm is the culmination of a pattern which has been building in my life since I was five and went to Disney for the first time. That pattern continued through getting on the internet for the first time, building early websites, moving to Florida, starting this blog, and writing, and writing, and writing. The resulting book is handsome, very readable, erudite, and very, very me – exactly as I hoped. You could say it’s the end product of three decades of living with a passion.

The Haunted Mansion has been a golden thread that has wound through the pattern off my life through up and downs but has never stopped bringing me joy and pleasure. For you, that thread may be Splash Mountain, or Indiana Jones Adventure, or The Beast at King’s Island, but I think everyone will recognize the passion in this passion project. It’s just surreal to finally see it out there in the world. I hope you love it as much as I do.

Boundless Realm is available at:

Thank you for all of my readers over the years for your support!