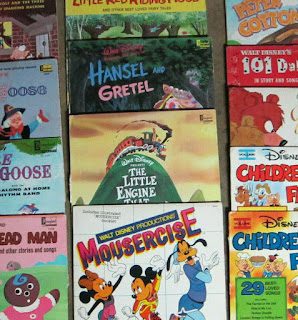 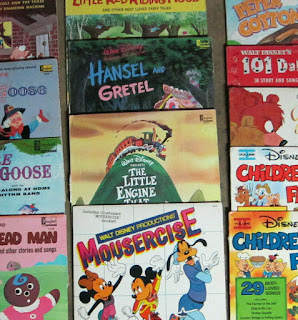 Once, a long time ago, listening to music at home meant buying records. And, in those days, Disney records were in a league of their own. The Disneyland record label consistently made something that was viewed as a banal part of everyday life fun and interesting with elaborate gatefolds, slipcovers, and lavish multi-page books. Disney’s key target demographic was children – cheap plastic record players had become increasingly common through the 1960s, and “storyteller” records with included storybooks were a good way to keep children entertained. Releases such as Country Bear Jamboree and The Enchanted Tiki Room are fascinating objects for modern theme park fans because of this lavish attention to detail.

Sadly, by the late 70s and early 80s, buying a Disney album on LP had become just about the worst way possible to experience the product. Long gone were the lavish booklets and clever custom programs and the quality of the records – which had never been all that hot to begin with – had degraded to near paper-thin. Late-stage landmark Disneyland Records releases such as The Official Album of EPCOT Center and, yes, Mickey Mouse Disco and Mousercise are just lousy products – thin-sounding, with cheap packaging. It’s a fairly depressing state of affairs for collectors who enjoy these items as mementos, even if the actual contents of the discs are rarely exactly earth-shaking.

But there is an exception, and I recently discovered it: the LP release of the Official Album of Tokyo Disneyland. It’s weird, and lavish, and surprisingly interesting.

To begin with, the booklet is back. Except this time it’s something more akin to the “Pictorial Souvenirs” produced for stateside parks in those days, making it a pleasant complement to the other early Tokyo Disneyland souvenir products, such as their guide maps and souvenir picture book.

We’ve covered Disney’s exceptional photographic publicity from this era before, and interestingly Tokyo Disneyland got the royal treatment in 1982 and 83 – even photographs which could have been duplicated from identical areas at Magic Kingdom, such as inside It’s A Small World, got brand new excellent photography.

Best of all, the center of the LP booklet is a reproduction of the park’s 1983 map poster, the one where the spot that would one day be occupied by Star Tours has the Queen of Heart’s soldiers “painting the roses red”. These delightful vintage items are among the most expensive on the second-hand market, so having a medium-size reproduction here is a real treat.

Go ahead, pop it on the turntable and give it a listen.

The contents of the LP are fairly interesting as well. The nearest analogue is the 1980 “Official Soundtrack of Disneyland/Walt Disney World“, but in comparison that release was frankly a budget affair – dropping together various tracks from already-released albums in basically random order. But in terms of arrangement and sequencing, the TDL effort vastly exceeds it.

For instance, the 1980 DL/WDW release has a few tracks that paste together some of the more popular shows, such as Country Bear Jamboree and Hall of Presidents. These are clearly cut down from the existing mix-down versions done for lavish LPs released in 1972, giving the tracks a rushed, inelegant sound.

In comparison, the TDL equivalents of these tracks are actually mixed from isolated source elements, possibly because the music elements were available having been utilized in creating the new Japanese language soundtracks. The new versions are much better, and give us opportunities to hear things not heard in any other version of these soundtrack releases – the piano introduction to Teddi Barra’s number in Country Bear Jamboree presented without Henry’s narration being a high point.

The entire first side of the album is dedicated to Fantasyland. Walt Disney Productions was very concerned that Japanese audiences would not connect with the other areas of the park, which is why the Americana aspects of the park are de-emphasized – renaming Frontierland to Westernland, for instance. But Japan HAD been a clearing house for Western animation and cartoons through the 50s and 60s, and the emphasis on their cartoon back catalogue here both reflects Disney’s strategy in Japan and sets the stage for the cartoon mania which still grips that park. 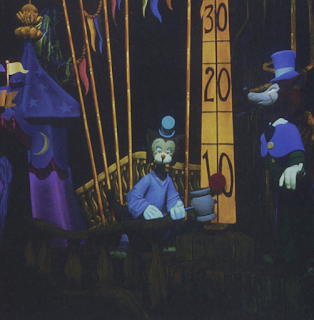 The extra space allows the Disney sound engineers to do some interesting things. Background and incidental music is featured, something that would never happen on Western releases until the 21st century. The version of Mickey Mouse Revue finishes with a cut-down version of the attraction’s theater entrance music, ending with funky guitar riffs which nearly scream 1971. Elsewhere, attraction underscore is presented for Peter Pan’s Flight and It’s A Small World.

The crown jewel is Pinocchio’s Daring Journey, which was heavily marketed within Japan as being designed exclusively for Tokyo Disneyland (it wasn’t, and managed to remain exclusive to Tokyo Disneyland for about three months, but theme parks could  get away with things like that in 1983). Practically a quarter of the first side of the platter is devoted to this ride, with a mix of what I believe is attraction underscore and Famntasyland area music. It’s bizarre to listen to this record as elaborate mega-attractions like Pirates of the Caribbean blip by in one-minute sound clips while Pinocchio’s Daring Journey goes on… and on… and on. The soundtrack on this record is longer than the actual attraction is.

Side Two continues with excellent Japanese-language compressions of Tiki Room and Country Bear Jamboree and is highlighted with a short version of Meet the World.  The Tokyo Disneyland record is not only the best park soundtrack of its era in both technical and presentation areas, but also paves the way towards the modern Disneyland soundtrack.

Purchased in a bulk lot of Tokyo Disneyland items, I picked up the cassette on a whim because I was intrigued that it was devoted entirely to Fantasyland – before I knew that it represented Side A of the LP release. But I was fascinated by the oddities of its tracks, especially the Daring Journey track, and was intrigued enough to import the LP from Japan to continue the search. Here, in the interest of completion, is the cassette version of the Fantasyland tracks.

I’d still like to know how this was released. There’s no indication of it being, say, Cassette 1 of 2, and it appeared in my life all alone, in its own vintage plastic case with no insert. A compact cassette can hold much more music than an LP can, so if Disney simply wanted to issue the TDL soundtrack on cassette, they were perfectly capable of doing so without splitting off the Fantasyland tracks over two sides. What I suspect is that this was released as part of some sort of book and tape combination, probably focusing on the Fantasyland area of the park, and the book has since gone missing.

It’s an oddity, to be sure, but an oddity that crosses over through a lot of my interests – there can’t be too many others who are invested in theme park music, vintage releases from Japan, write a historical blog such as this, and who have the equipment already sitting around to digitally transcode both records and cassette tapes of both.

It’s a narrow window, sure, but even minor players like these in the history of how a park was promoted upon opening can be interesting, never mind the very first overseas Disney theme park, the first black ship launched into foreign waters. It’s an auspicious moment that looks both backwards and forwards at the tail end of the Post-Walt era before Disney would rapidly become very, very different.