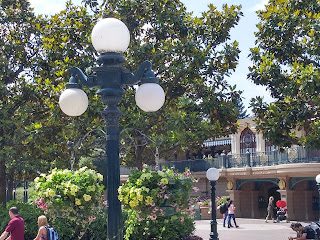 To walk through Main Street at Disneyland Paris is to see the pinnacle of the concept of Main Street; if you enjoy things like fussy little details and elaborate interior finishes, it’s the Space Mountain of that. It’s one of those cases where, even if you know it’s going to be good, you can’t possibly be prepared for just how good it is.

When it came time to document my ardor for this park entrance of park entrances, it seemed most logical to hone in on its remarkable light fixtures. Main Street at the other parks is already a master class for awesome light fixtures, but Paris manages to top all others simply through pure, staggering variety. 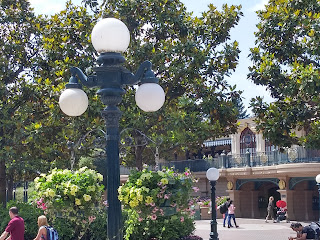 Magic Kingdom and Disneyland kept it fairly simple outside their parks, with straightforward city park-style globe fixtures and plain green fencing. Paris takes the reminiscent approach, but of course the effect of the whole area is anything but understated thanks to the Disneyland Hotel dominating the area. Magic Kingdom uses simple frosted globes to create a uniform look across its entrance area, whereas Paris is already introducing complexity to the same spot, with upward-facing and downward-facing lights here.

Of course it’s fair to say that Main Street has already “begun” by the time you’re approaching Disneyland Paris from the Village, whereas Disneyland, Magic Kingdom, and Tokyo all withhold that richer theming until you get inside their Main Street areas. Disneyland Paris rolls out the red carpet from the start with a staggering gauntlet of architecture and gardens, and the effect is unlike any other park entrance in the world. 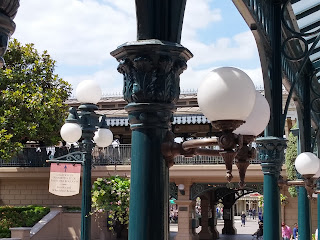 Covered breezeways with turn of the 20th century wrought iron frills bring to mind Paris train stations and protect from the weather; the plain frosted globe lights continue here and indeed through the first leg of Main Street, as seen in an example from Town Square below. Until Magic Kingdom’s Hub area was rebuilt and claimed by Fantasyland, all three of the original castle parks defined the areas in front of the entrance tunnels and the areas between Main Street and the castle as decompression spaces, where there could exist any theme or no theme. This is especially apparent at Disneyland, where each land encroaches on the Hub as if to reach out and offer a preview of what can be found inside. Paris keeps each land separate, requiring visitors to walk through green, empty spaces to reach the next area, almost like each is a self-contained theme park. But here we can see how, through the elaborate hotel entrance and amplified complexity of even minor features, Paris is fixing to top every other park.

Perhaps the biggest departure from the classic Main Street model in Paris are the covered Arcades that bypass the bulk of the land; whereas Disneyland and Magic Kingdom have somewhat themed bypasses, the Arcades are central to the appeal of the Paris Main Street. The effect of entering and seeing all of the dozens of lanterns with their singing gas flames all the way down the length of the arcade is one of the most impressive things in the whole park.

About halfway down the Discoveryland-side Arcade, the unified steel and glass look stops and we pass through a rustic barn-style area, originally intended to open up to a Farm Market behind Main Street. This area has its own unique light fixtures: 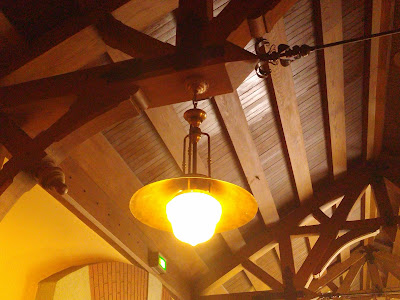 The Frontierland-side Liberty Arcade also sometimes takes time to rest and offer a visual break, as in these simple chandeliers outside the Restrooms. Notice that the green and bronze look brings to mind the Statue of Liberty without ever having to be overt about it: 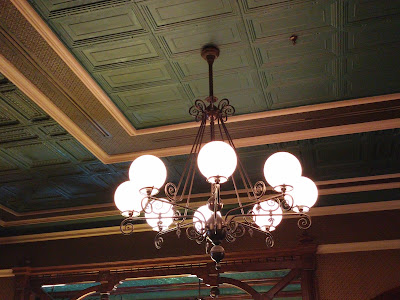 It’s hard to understate the effect these traffic and weather crowd relief valves have on the whole feeling of Main Street. If there ever was a spot in any Disney theme parks where it feels like great light fixtures are the whole show, it’s in these Arcades. 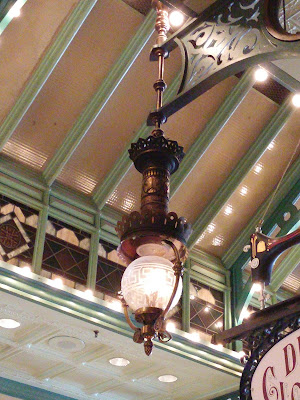 Huge clusters of lights add a busy feeling to the Emporium. I wasn’t super impressed by the DLP Emporium, but it does have a bright, “modern’ feel that contrasts nicely with the burnished browns and golds elsewhere on Main Street. 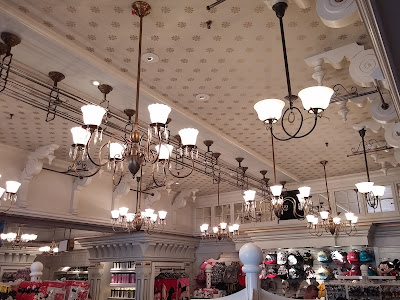 One exception is this amazing stained glass dome above the Emporium cash wrap. Besides housing an impressively exuberant chandelier, the stained glass images represent American industry and ingenuity and this is one of the coolest details in any Disney park anywhere. 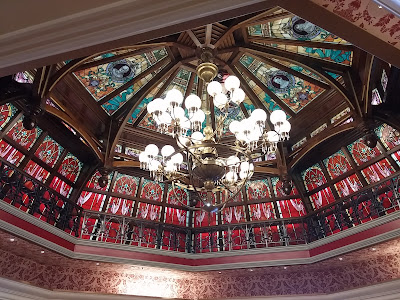 Across the street, the Boardwalk Candy Palace has light fixtures which drip with brightly colored pendants. 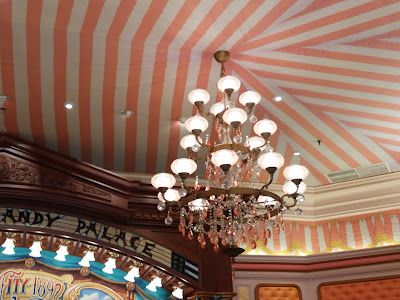 Besides bringing to mind hard candies, this design touch adds to the carnival atmosphere in this store. 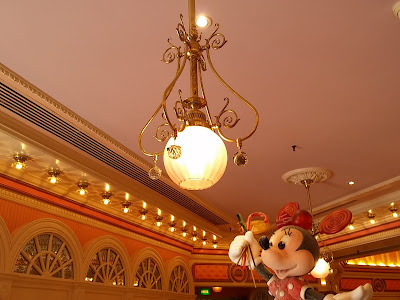 Even the outside light fixtures are studded with hard candies. This is a great example of how choosing to isolate one specific design choice to one specific area can really have an impact. Remember the darkened interior of Magic Kingdom’s House of Magic and what a cool contrast it was with the rest of Main Street? 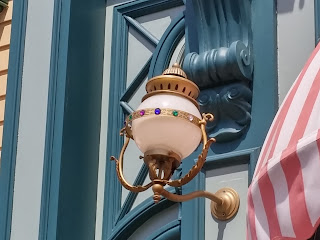 Casey’s Corner has their traditional Tiffany-esque lamps which bring to mind advertising of the turn of the 20th century. 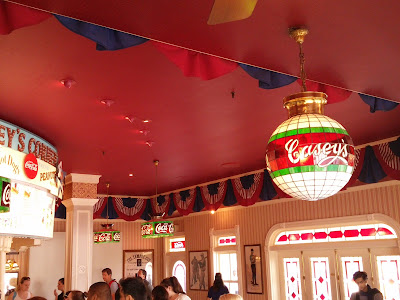 The interior of the Market House Deli is cluttered, warm, and red, and these simple hanging lamps add to the cosy atmosphere. 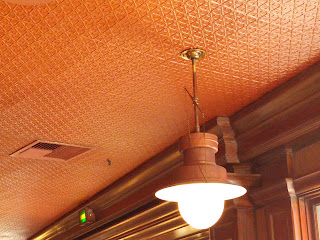 Additional globe lights in the rear hallway to the Arcade. 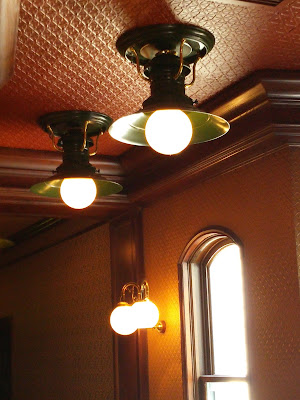 Disney Clothiers is interesting, and has a refined, feminine elegance to it’s various rooms. 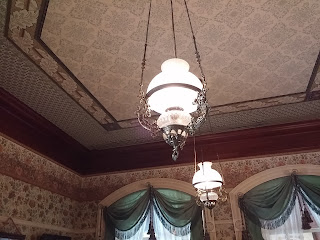 The lights in the boy’s clothing rooms have a subtle hint of blue in their frosted globes, hard to capture in this photograph: 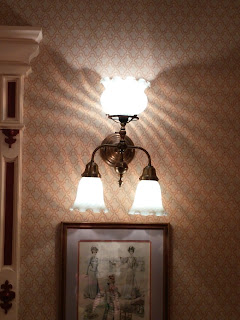 The lights in the girl’s rooms, of course, and tinted pink. Here’s a very fine gas lamp-style fixture in the far back room: 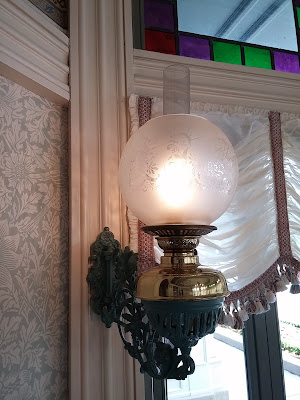 Much of Paris’ Main Street shies away from the sentimental sides of Victoriana, instead preferring to push towards the brass, barnstorming aspect, but Disney Clothiers has layers of detail that really bring the era to life.

Harrington’s, up the street, is a monied and masculine counterpoint, bringing to mind a bank: 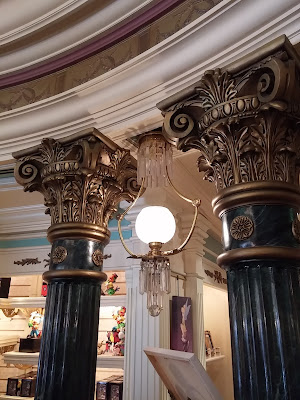 Harrington’s has another over the top glass dome, although the effect of this one is less surprising and more stately. Everything about the layout and design of the store is based around this impressive centerpiece. 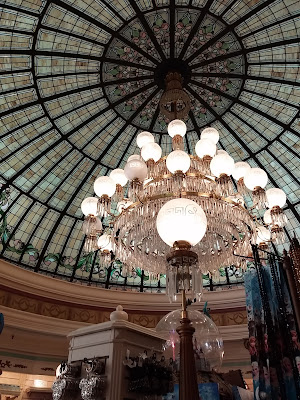 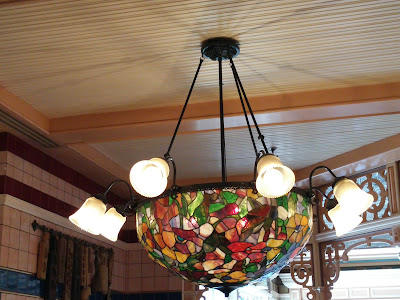 It also features these incredible, strange tables topped with lights and then fans for good measure: 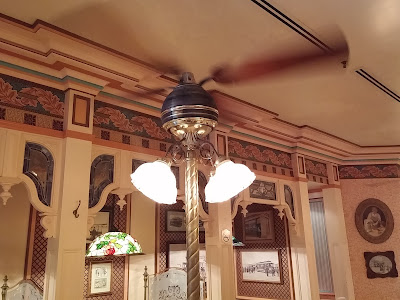 If we head over to the Liberty Arcade, the rotunda just off Center Street which includes the Statue of Liberty Diorama has a unique array of light fixtures which reinforce the Lady Liberty theme: 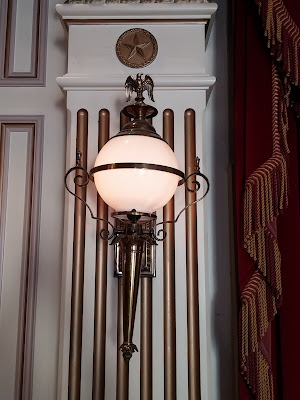 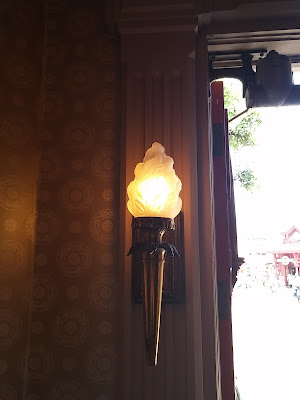 Liberty Torch sconces here are a bit more overt. 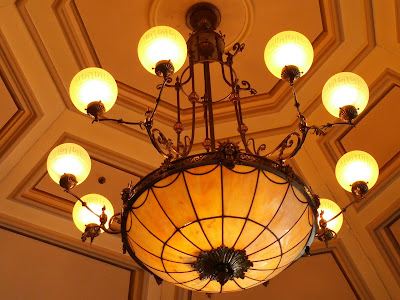 If we stop next door in the lobby of Walt’s, we encounter unexpected Gothic Revival influences: 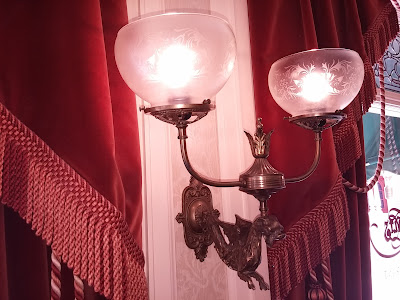 Dragons ands gryphons are design motifs tied in with the Victorian fixation on a sentimental conception of medieval times, a design language we can also see being used in the Haunted Mansion. In this case, the fantastic creatures bring to mind fairy tales, appropriate for a restaurant bearing the name Walt’s. 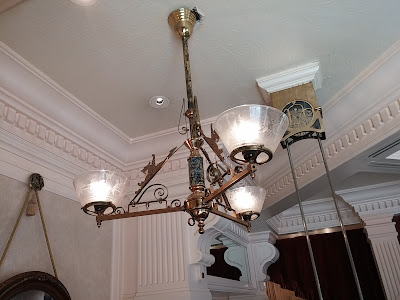 Victorians didn’t just cover their stuff with detail to be obtuse, all of this design work was meaningful to them. One of the strengths of the Paris Main Street is that it actually uses these submerged meanings to help create new ones in each interior space. 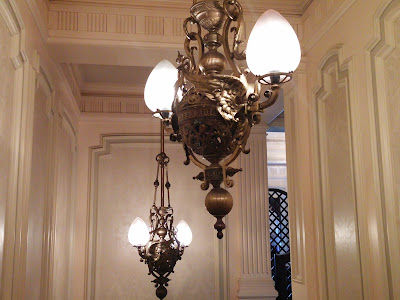 On the Hub, I think the most impressive interior on Main Street is Victoria’s Restaurant, which serves things like pot roast and absolutely nails the feeling of sitting in a Victorian parlor. The level of detail in these rooms is staggering. 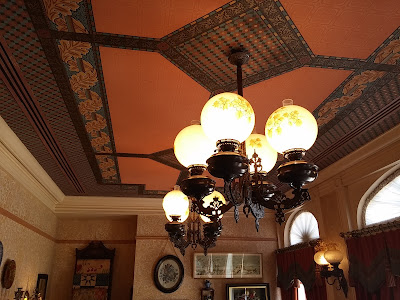 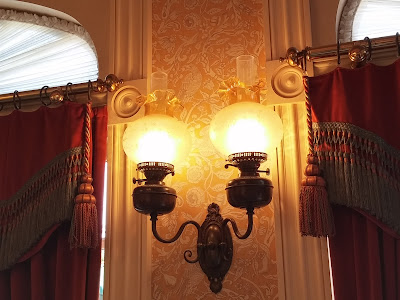 Main Street at Disneyland Paris is a definitive Main Street, the Main Street that makes subsequent attempts to do other Main Streets look like fool’s errands. It’s tough to top the level of care that went into this one.

But that’s most of Disneyland Paris, isn’t it? Throughout the park, even in places where it didn’t really work, there’s a real attempt to present the best version of everything. And when you start really drilling down to the level of, say, a lighting fixture, a door handle, or a wallpaper, that’s where the extra effort begins to come out. The park really is the culmination of everything that was learned between 1955 and 1990, before Imagineering went hip and ironic in the 90s.

Feature Animation gets a lot of credit for pushing the boundaries in the 90s but Americans hate when ambition meets mixed success, and while Lion King is an international blockbuster, Disneyland Paris got off to a rocky start. In a fairer world, it would be remembered as a monumental achievement  instead of an expensive and problematic folly. The executive’s backs were turned, and these design teams were reaching for heaven.