Sally’s Cozy Cone Motel was the place to stay in Radiator Springs.  The set piece from the Pixar animated feature Cars owes it inspiration to the now iconic Wigwam Village chain of motels that originated in the 1930s and 1940s.  There were originally seven Wigwam Villages scattered across the USA, but now only three remain. Two are located on the Mother Road–Route 66.  On our Californy or Bust road trip, we visited Wigwam Village #6 in Holbrook, Arizona. The other surviving villages are located in San Bernadino, California and Cave City, Kentucky.  All three remaining locations are listed on the National Register of Historic Places. 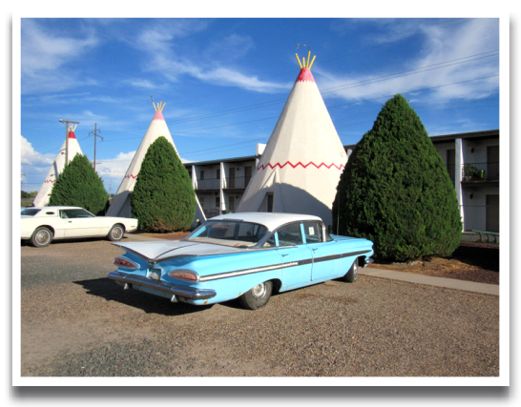 The Wigwam Village was the brainchild of Frank A. Redford, who built the first one in Horse Cave, Kentucky in 1933, and patented the design for the complex. Other villages emerged over the next two decades, including locations in Alabama, New Orleans and Orlando, Florida.  Redford himself built Village #7 in Rialto in the late 1940s. Arizona motel entrepreneur Chester E. Lewis secured the rights from Redford to build his own version of the unique design, and opened Village #6 in Holbrook in 1950.

The design of the Cozy Cone office and lobby building was influenced in many ways by the Blue Swallow Motel, located on Route 66 in Tucumari, New Mexico.  The Blue Swallow is also listed on the National Register of Historic Places. 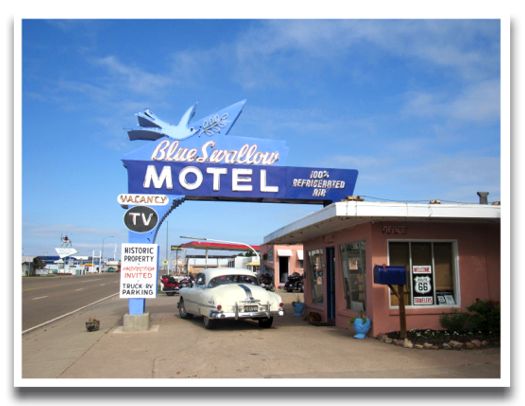